A couple weeks ago while Christy was still in town we had a storytime extravaganza the the Moonhil's. Paul encouraged our good friends Beth & Brian to get themselves out of the house without the little one. Dexter came and hung out at our house for some fun, pizza and musical stories!

It all started with a book Christy spotted at the library when we were there... 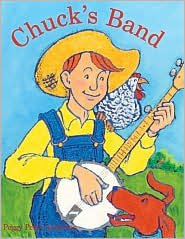 Christy told the story and the rest of us played along! The kiddos got so into it. Just before I started taking this video, Dex was doing a mighty boogy. Didn't catch that but you have to keep your eyes open for the funniest part for me... toward the end of the video Zane picks up a harmonica. If you watch him, he plays it and then taps it on him leg. It is so funny because it is because he sees Paul doing that with the harmonica before he plays it to, I guess, clean it out or something. He is so intent on tapping that thing out! He just goes crazy playing every instrument we have!

It was so fun and a big thanks to Christy for getting the jam session going!