We just got back from a mini vacation that was well worth it! We decided to go to my Grandad's house in North Naples (practically in Bonita - about a 20 minute drive for us) and spend the night Saturday night. He is in New York right now and always has told us to use his place whenever we want. He has a pool which is always fun! We went up yesterday evening and went for a swim right away, of course. We brought a simple dinner to make (Boboli pizza crust, sauce & cheese, left over steamed veggies) and then had a relaxing evening. Zane ended up falling asleep next to me on the couch while we were zoning out to misc. television and then slept the whole night. Paul & I vegged and watched a movie... ahhhh! Woke up, went for a swim again of course, had breakfast and then took off! Dylan had a super good time too cause she got to exhaust herself in the pool. It was so simple and really nothing much but it was the best calm time. It was just really nice to get out of the house. (No pics from the vaca though. We were too busy relaxing, I guess!)

And then... I have to share our super deal at the dent grocery store because Paul and I still can't get over it! On the way home is a grocery store that sells "dent" items. It is too far for me to go there often but when we are up at Grandad's it is normally on our way home. This time I actually got to stop. I did a super speed shopping trip because Dylan was with us and Zane was sleepy but I got so much stuff for only $40 including a bottle of wine and a super giant bottle of organic tamari, a King Arthur cinnamon bun mix (never tried this stuff) AND they had my granola!! The best part is that the store often has a good selection of random organic brand snacky stuff. Check out the spread we had when we got home... now I only have to find a place to put all of this stuff! 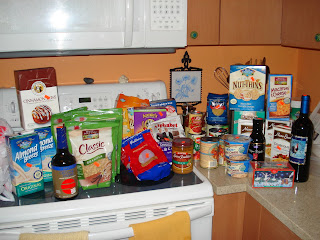 Can you tell I am in my "good" week? I started feeling better on Thursday or so. I still get really tired and sooooo achy. And I don't know what it is about my feet but the bottoms of them are ALWAYS swollen and so tender. By the end of the day I just can not bare the thought of getting up yet another time to walk around. BUT, overall I get more energy compared to the week following the chemo and I get happier. I can better deal with things. This is good. We all have more fun on the "good" week.


Some Friday night fun (after we had a great dinner with our friends Tiffany & Brianna). The video is really dark but if you can look hard enough to figure out what we are doing, it is pretty funny! (It involves Dylan's leash and Zane's binky!)