Zane insisted that we go to the mall (ahhhh!!!!) and see Santa. He really had to ask him a question. He really needed to know how he got his reindeer to fly (not sure what he is planning). The answer he got was pixie dust but I know that a lot more chatting went on after this picture and I have no idea what about. Mostly because after he got off of Santa's lap he came to me and was about to cry because he forgot to tell him what he wants for Christmas. What are they planning??

He was so nervous to to this on his own. He really wanted one of us to sit there with him but we convinced him that was not an option. So he said he would be brave. And he was.

He also had to where some funky green glasses of course and his Batman shirt was a must for seeing Santa since his Batman Pjs were dirty. 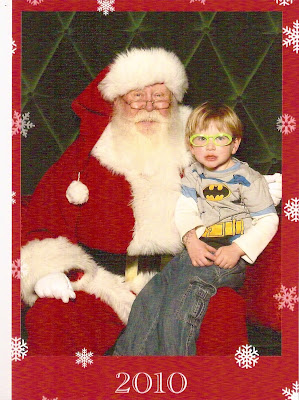