So it is sad the weekend is over. It was fun to start into this by hanging out with friends in a familiar place. Going to Sara and Sam's house is like going to a second home and so it has not all felt "real" until tonight. Well, maybe I should say when I had to stand in their driveway and wave goodbye to Paul and Zane as they left to return to Naples.

Friday was a doctor's appointment but really all it was for was for me to sign about 20 pages of consent forms. They had given me copies previously to read on my own which I did... mostly. Really it is a bunch of stuff that you really don't want to know. All of the terrible terrible things that could go wrong and all of the awful things that these drugs can cause... don't want to hear it! Because really, what am I going to do? Change my mind? So I inked my signature on those babies really quickly and handed them back.

Saturday we woke up slow and then me, Paul and Sara took Maya and Zane to the new Glazer Children's Museum in downtown Tampa. It was pretty cool but REALLY super packed. This is really the kind of place that Sara and I are used to doing with our kids during the week because it is never as busy but when we all get together we end up doing these things on a weekend and boy oh boy was it crazy crowded with totally hyped up kids! It was good to take them there and have an adventure but it was a overly stimulating experience.

Then we loaded the kids up in the van and we all trekked to Moffitt for my first Neupogen shot. Sara hung out with Maya and Zane in this cool garden that they have there while Paul and I went up to get my shot. The shot turned into two shots. Wonderful stuff. I knew that I was getting double the amount of Neupogen that I was normally prescribed after my previous chemo BUT I did not realize that that actually meant that I get two shots of it. They can not actually fit the amount of Nuopogen that I need into one syringe. THEN they tried to tell me that they needed me to sit there for an hour to make sure that I did not have any reactions to the drug which really pissed me off. First of all, they did not tell me this in my schedule... Second of all, because of that we did not plan for that. Now we had two very tired and worn out kids hanging out outside waiting for us and quite frankly I was so darn worn out that I could not imagine mustering the patience to sit there. So I told her that we had two kids waiting for us and that that was not possible. I think she saw the exhaustion in my eyes and so knowing also that I have successfully had this drug before, she let me go after 15 minutes. Whew! I kind of felt bad but I really did not want to sit there for that, especially knowing full well that I was not allergic! At this point in my lifetime I have probably had 30 to 40 of these shots!

So today we woke slowly and hung out. I did wake up with the beginning of the bone pain that the drug causes. I get it quite a lot in my hips. Also my neck and even my cheek bones. It also give me quick a kicker of a headache. So Zane and Paul took off to get back to Naples and Sara drove me to my Moffitt appointment for my next shot (which are at 5pm each day). Then we met my Mom at the hotel we are staying at until I get admitted to the hospital this coming Friday. The three of us went out to a cozy Vietnamese dinner and now Mom and I are crashing out. So tired.

Tomorrow I get to wake up and not eat or have a drop of water. I will arrive at Moffitt at 10:30 and have the catheter line put in. They give me "twilight" sedation. Then we will learn how to care for the catheter, come back to the hotel and rest off the sedation and then back to Moffitt again for a 5pm Nuopogen shot.

I miss my boys tremendously already. Tomorrow we have a potential skype date and that will be good.

Love to all of you out there and love those kind words, thoughts and focus. This ball is rolling forward and it really didn't sink in till today. It was a hard evening.


Here is a picture I took with my phone at the museum. They had a pretend veterinarian's office and Zane really though it was cool. Eventually he put on a lab coat and took this little kitty's vitals. It was just so damn cute!!!! 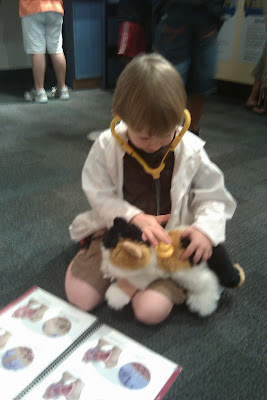