Last night Zane saw that Paul and I brought home part of an organic watermelon from one of our favorite stores (especially mine), Food & Thought (had not been there in a while and found out they are expanding Jan 1!!). He LOVES watermelon so OF COURSE he asked for some. But not just some... a BIG piece! Which means he does not want me to cut it up into bit size pieces for him... he wants a SLICE of the thing. While I am cutting up a slice for him he is saying over and over, "towel, sit, on floor. towel, sit, on floor." And I realize that he is taking the kitchen towel and laying it carefully on the floor for him to sit on. Now, for the dedicated Holimon bloggers out there, you will remember a few months back where we did this with him with watermelon after his bath on his towel.

Paul and I are just amazed every single day by how much he remembers and takes in! 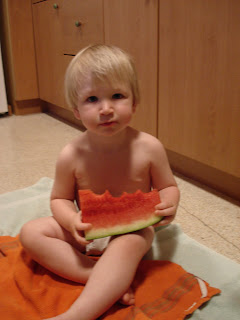 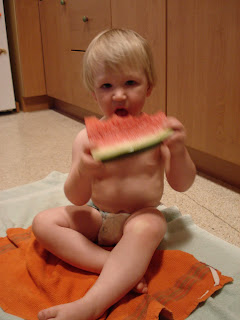